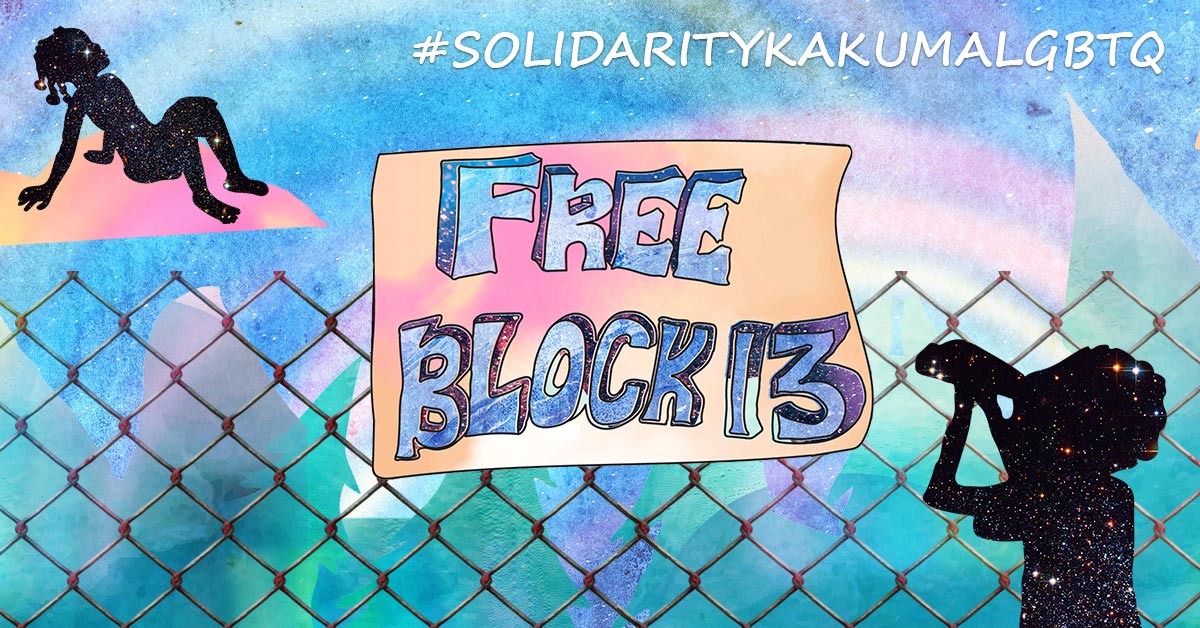 On the morning of March 15th, 2021, a petrol bomb was thrown into a group of LGBTQIA+ refugees, allies and their children who live in Block 13 in Kakuma refugee camp in Kenya.

This incident is the latest in a long list of vicious attacks against LGBTQ+ refugees at Kakuma Block 13. The first fire attack occurred on February 15th 2021, which saw 4 gay men set ablaze by other migrants. LGBTQ+ refugees are unsafe and experience different forms of physical and sexual violence on a daily basis; from beatings and torching to slashing and rape. The slow response by the police and other authorities normalises and perpetuates the violence, vulnerabilities, and indignity experienced by LGBTQ+ refugees.

The condition of burn victim Chriton Atuhwera hangs in the balance requiring immediate evacuation to a medical facility in a safe country where he can receive the specialized medical treatment that is urgently needed to save his life. The second victim, Jordan, is also in danger of further complications if he is not evacuated to a more sterile and specialized environment.

We are aware that in the nearly one month since the horrific, homophobic, petrol bomb attack that left them burnt across significant portions of their bodies, Chriton’s condition has severely deteriorated, despite being at the highest level of referral hospital in Kenya.

He has spent much of this time at Kenyatta National Hospital tied to his bed, unable to access food, given that the UNHCR prevented their caregivers from accompanying them. This has weakened him severely leading to the need for him to be on a feeding tube.

We have been informed by the medical staff at Kenyatta National Hospital that they have done all that they can with the resources available to them, but still his condition continues to deteriorate. However, we believe that the care he could receive in a third country, with more specialized care, could save his life.

Chriton is a human rights defender who has diligently provided leadership on Block 13 attempting to shield his fellow LGBTQ+ Block 13 members from harm during life threatening violent homophobic attacks on them. In Chriton’s time as an LGBTQ+ asylum seeker in Kakuma he had many opportunities for UNHCR to save him, but evacuation and other safe solutions to protect him have not been executed. We have one chance left to save his life, let’s not be silent.

Despite some minimal improvements to Jordan’s condition, he still remains without a caregiver and in unsterile conditions where he’s prone to infection and inadequate care. His condition could also take a sharp turn for the worse at any given moment. Specialized care for him is also immediately needed to avert a second tragedy .
We call on all human rights and humanitarian organizations to organize the immediate medical evacuation of both Chriton and Jordan, to a safe country where they can receive the necessary specialized medical care to save their lives.

We also call upon these organizations to advocate for the relocation of remaining Block 13 members to a safe place and expedite their resettlement as they are survivors of intensive and unending homophobic attacks.

Please sign the petition calling for the relocation of the LGBTQ+ refugees from Kakuma Camp.