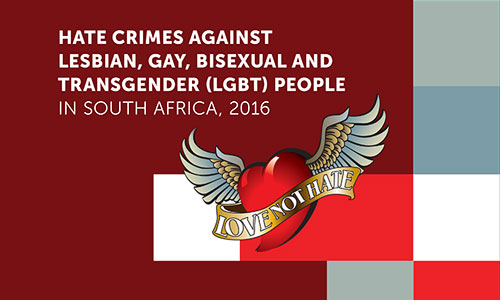 A groundbreaking new report has revealed that more than half (55%) of Lesbian, Gay, Bisexual and Transgender (LGBT) South Africans fear they will experience discrimination due to their sexual orientation or gender identity.

These fears are well founded: 44% of those surveyed said they had indeed experienced discrimination in their everyday life, due to their LGBT status, in the past two years.

The report – Hate Crimes against Lesbian, Gay, Bisexual and Transgender (LGBT) People in South Africa, 2016 – was conducted as a research initiative of the Love Not Hate Campaign by OUT LGBT Well-being, in collaboration with Nudge Insights and Analytics.

A total of 2,130 South Africans participated in the online study, which is believed to be the first-ever national research on LGBT discrimination and hate crimes.

Among the most troubling findings are that discrimination levels in schools are extremely high: 56% aged 24 years or younger indicated they had experienced discrimination based on their LGBT status in school.

Reasons for lack of reporting included concerns that police would not take victims seriously, would do nothing with the complaint, were homophobic themselves, or even worse, were the abuser themselves.

“We need effective prevention and responses to hate crimes. Sadly it seems that we are failing at both,” says Lerato Phalakatshela, Hate Crime Manager at OUT LGBT Well-being and spokesperson for the Love Not Hate campaign.

“There are very few societal programmes to address LGBTI prejudice and hate crimes, most notably in schools. When it comes to responses, the criminal justice system is slow to react and justice is not seen to be done. That explains low reporting rates; people don’t trust the system,” continues Phalakatshela.

Other findings included in the report:

“We can identify from the findings that people do not report and as civil society organisations we can only do so much to encourage people to report; however we cannot guarantee them justice,” explains Dawie Nel, Director of OUT. “We need to find alternative and effective mechanisms to improve on the criminal justice system through existing collaborations and structures,” Nel says.

The main aim of the research was to gather insights on the level of discrimination against LGBT people in schools, in the health care system and in general. This research serves as a tool to inform practical solutions in addressing the issues that are faced by LGBT persons living in South Africa.